A Wet December: Drought buster, false hope, or somewhere in between?

Register for the January 24 CA-NV Drought and Climate Outlook Webinar.

California/Nevada conditions as of January 4, 2022:

How Is Drought Impacting Your Neighborhood?

Click to see drought indicators, outlooks, and historical conditions by city, county, and state, and to sign up for local drought alert emails. 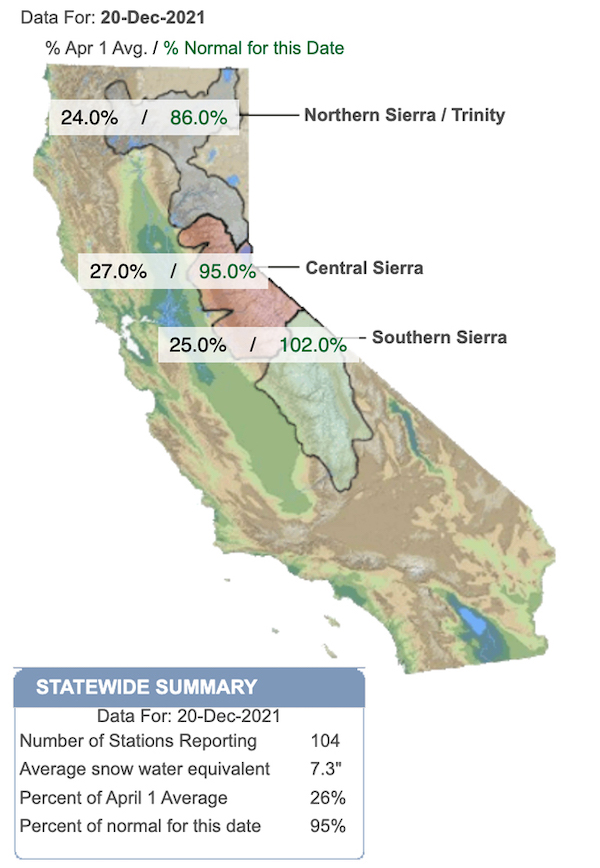 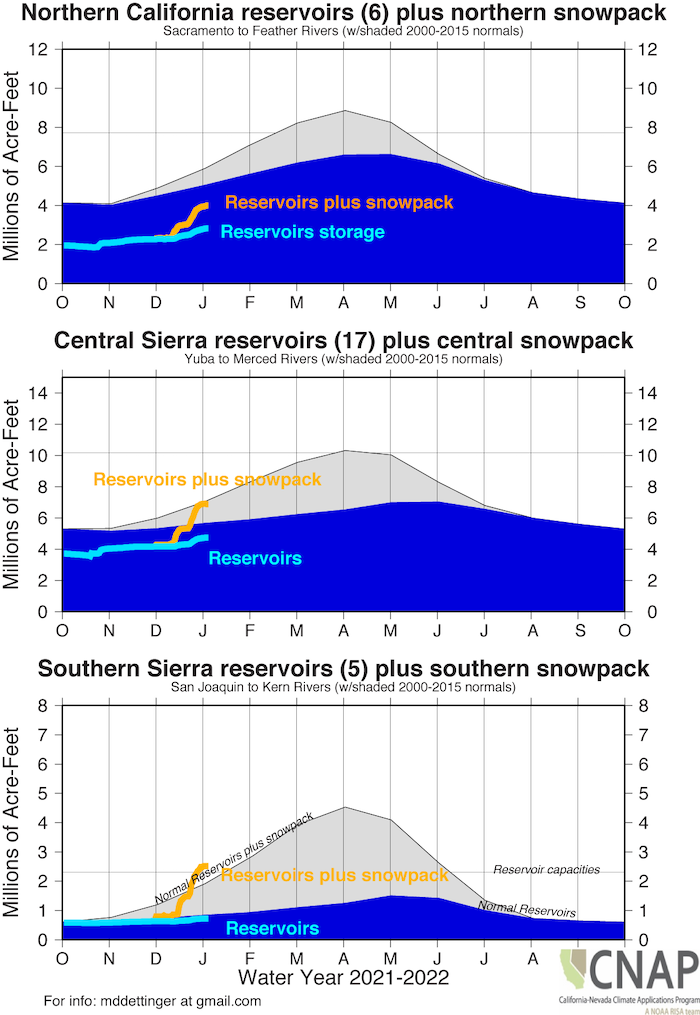 NOAA’s ENSO alert system status is currently a La Niña Advisory. La Niña is favored to continue through the Northern Hemisphere winter 2021–22 (~95% chance) and transition to ENSO-neutral during the spring 2022 (~60% chance during April–June). For more information, please check out the NOAA ENSO blog.

The next three months’ forecasts show drought persisting across Nevada and remaining but improving over much of California, with removal likely in the south coast. Changes were introduced for California and Nevada in the seasonal drought outlook at the end of December due to a wet pattern during late December across the western contiguous U.S., favoring improvement. Modifications included depicting improvement (D2–D4 areas) and removal (D1 areas) across parts of the Great Basin, Southwest, and California.

According to the National Weather Service's Climate Prediction Center (CPC), during the first three months of 2022 (January-February-March), the pattern across North America is likely to be strongly influenced by ongoing La Niña conditions, which typically favor an active weather pattern and below-normal temperatures across the Pacific Northwest, northern California, northwest Nevada, and north-central CONUS, as well as abnormally dry, warm conditions across the southern tier of states. The CPC January and January-February-March temperature and precipitation outlooks broadly reflect this signal, with a potential for below-normal precipitation in southern California and southern Nevada with equals chances of above- or below-normal precipitation for the rest of the region (except for small area along the northern California and Nevada borders that slightly favors above-normal precipitation). Therefore, due to the current conditions combined with seasonal outlooks, drought improvement is favored for much of coastal central and northern California and the Sierra Nevada, while persistence is maintained across the San Joaquin Valley, which relies more on spring snowmelt for moisture. In the near term, a weaker system is expected later this week to impact northern California and Nevada, followed by a lull in storminess as a high pressure system is established in the eastern Pacific.