Dry soils are first in line for winter snowmelt.

Over half (56%) of the combined Intermountain West region is in Extreme (D3) to Exceptional (D4) drought.

Moderate (D1) or worse drought has been in the region since August 2009.

The impact of the early snowmelt is illustrated in the soil moisture graph below:

Over the last 30 days, a series of small winter storms provided steady snow to the mountains of northern Utah and western Colorado. The accumulated precipitation was small compared to the average for this time of year. 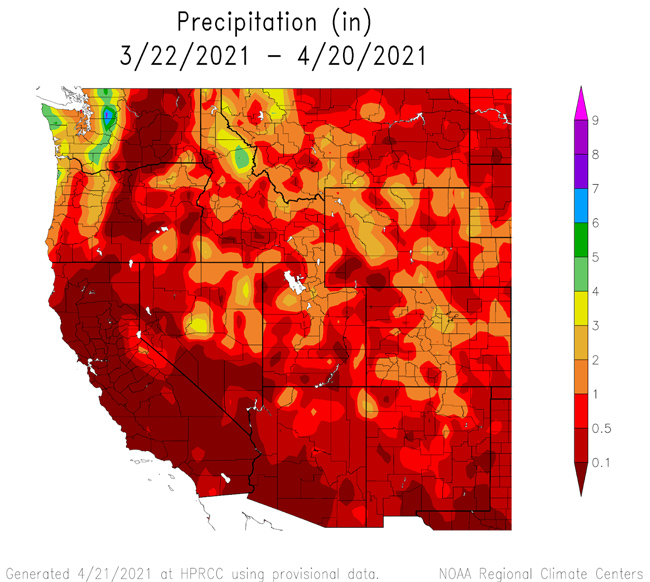 For May–July, there is a greater chance for above-normal temperatures across the Intermountain West.

The precipitation outlook shows that below-average rainfall is the most likely outcome for May–July across the Intermountain West, including New Mexico, Colorado, Utah and Wyoming.

Long-term drought conditions are forecast to continue at least through June across the Intermountain West.

This drought early warning update is issued in partnership between the National Oceanic and Atmospheric Administration (NOAA), and the offices of the state climatologist for Arizona, Colorado, New Mexico, Utah, and Wyoming. The purpose of the update is to communicate a potential area of concern for drought expansion and/or development within the Intermountain West based on recent conditions and the upcoming forecast. NIDIS and its partners will issue future drought updates as conditions evolve.﻿

Tools for Navigating Drought on the Ranch