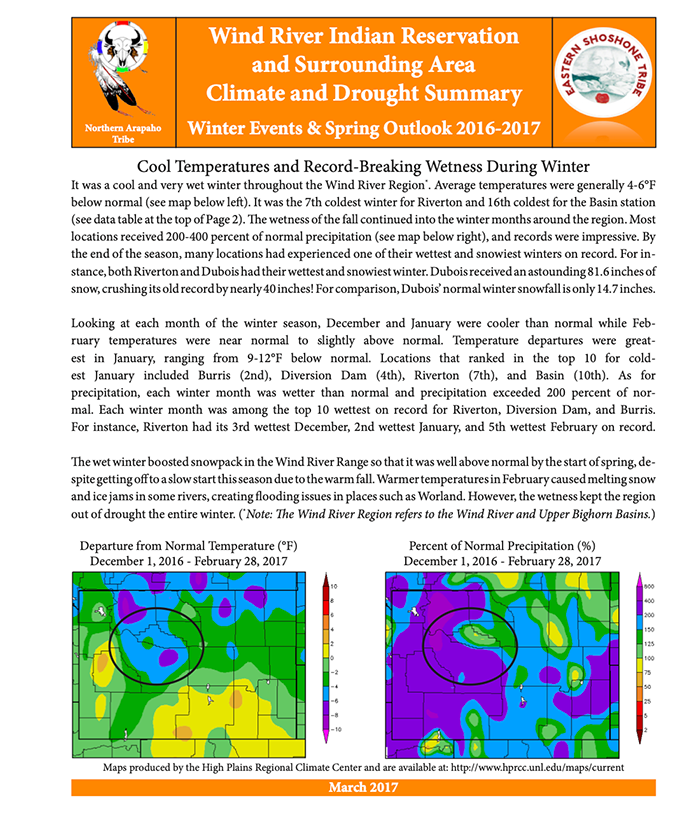 The Eastern Shoshone and Northern Arapaho Tribes of the Wind River Reservation in Wyoming have contended with periodic droughts, several of which have been particularly severe and impactful during the past two decades. Given their location in a semi-arid climate, the Tribes rely almost entirely on runoff from mountain snowpack for their water supply. Therefore, when this region experiences a below-normal winter snowpack, there is less water available during the summer.

After the drought of 2012 severely impacted the Tribes’ water supply, the Tribal Water Engineer (TWE) wanted to find new ways to monitor conditions to help inform the Water Board’s decision making on whether or not to declare a drought during the spring. So, the TWE and their non-tribal partners created climate and drought summaries, which they produced on a quarterly basis to better track climate conditions, including drought.

Inspired by the Navajo Nation, the TWE wanted to develop a climate and drought summary to be produced on a regular basis that described the evolving drought situation. The Tribes partnered with the High Plains Regional Climate Center (HPRCC) at the University of Nebraska-Lincoln, who initially developed a summary prototype and shared it with the Tribal communities for feedback. The summary evolved through several iterations to become a 4-page document describing current climate, drought, and water conditions on the reservation, as well as future outlooks. After producing the summary quarterly for about a year, HPRCC staff trained several water technicians from the Office of the TWE to put the summaries together. The HPRCC and the TWE co-produced several summaries until 2017. To help with further monitoring of climate and drought conditions, HPRCC staff also developed an online climate decision dashboard containing links to near real-time climate and drought information to help provide easy access to relevant data.

The summaries and dashboard have helped inform decision making on the Wind River Reservation. In May, the TWE has to decide whether to declare drought on the reservation, which would curtail water use for irrigation. At that point in the year, the mountain snowpack is running off, which impacts the water supply available for that summer and fall. The TWE has not only used the summaries to declare drought for the reservation, but also distributed the summaries to communicate climate and drought outlooks to irrigators for water-use planning. The TWE also gathered information from the dashboard present at Water Board meetings.

These tools have garnered interest from other tribal nations, which has resulted in subsequent partnerships to provide training on how to use climate information and produce climate summaries. Furthermore, widespread interest in the dashboard has led to the expansion of this tool to include other reservation areas throughout the Missouri River Basin.

The HPRCC and TWE led the work to develop and co-produce the climate and drought summaries and associated dashboard, and the HPRCC hosts and maintains the dashboard for the Tribes on their website. Staff from the National Drought Mitigation Center (NDMC) and the Department of Interior’s North Central Climate Adaptation Science Center (NC CASC)  also provided input on the initial design of the summary.

This work was partially supported by funding from NC CASC and NOAA’s National Integrated Drought Information System (NIDIS) through a multi-year project to assess the effects of drought on the Wind River Reservation. This project was led by a team from the TWE, NDMC at the University of Nebraska-Lincoln, the NC CASC (which was located at Colorado State University at the time), and the University of Wyoming EPSCoR.