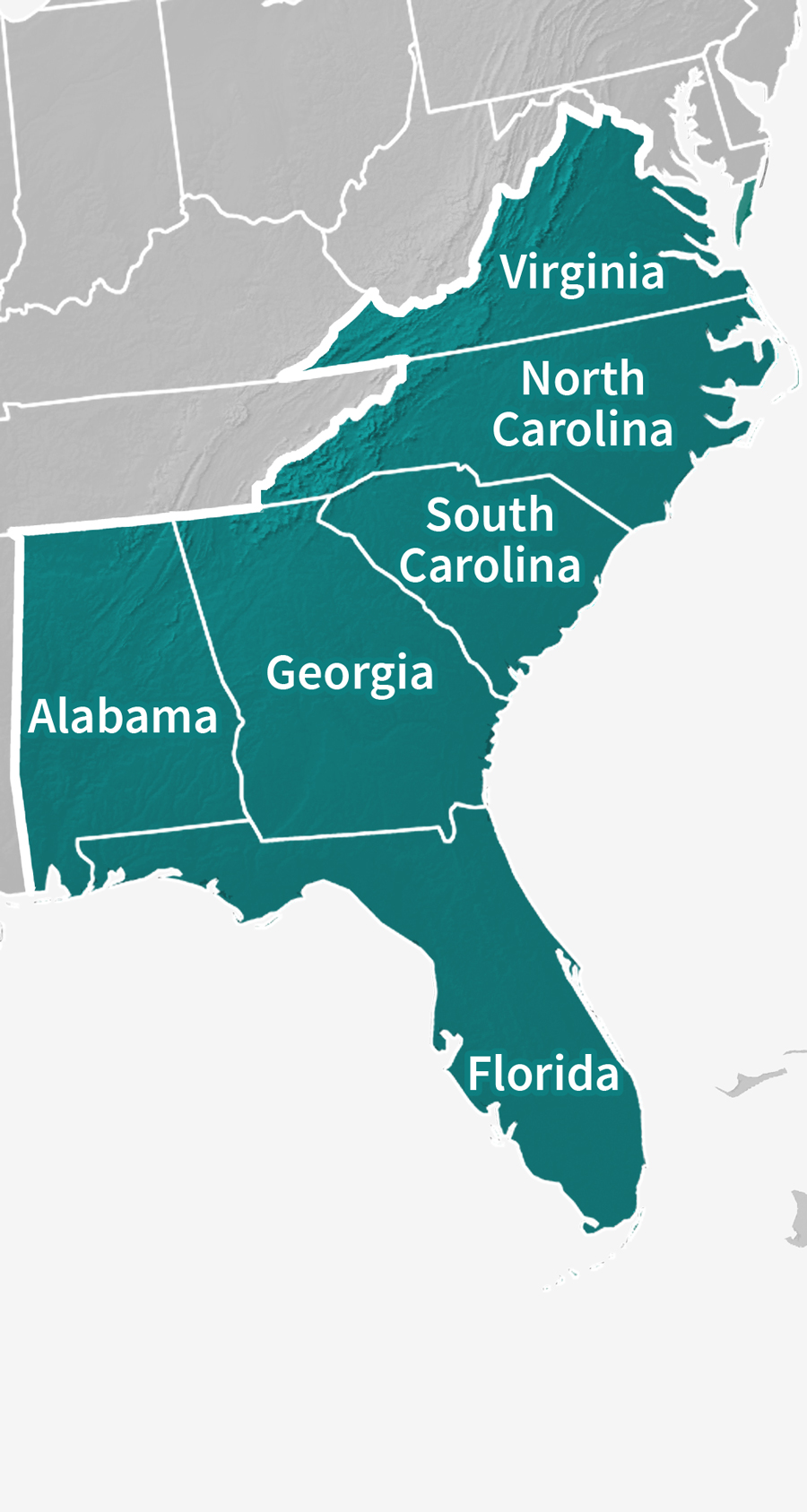 The Southeast region generally receives substantial precipitation and is often considered water rich. However, the region is increasingly experiencing record-breaking droughts, highlighting competing water demands. Drought conditions can develop rapidly in the Southeast, especially when the lack of rain and high temperatures combine to increase evapotranspiration of water in the soils. Recurring droughts in 2009 led NIDIS to establish the Apalachicola-Chattahoochee-Flint (ACF) River Basin Drought Early Warning System (DEWS) because of the breadth and complexity of the Basin’s ongoing water management challenges. The Coastal Carolinas DEWS was established in 2012 following a series of droughts that exposed existing and emerging drought vulnerabilities that are particular to coastal regions.

Recognizing a need to improve drought early warning across the full geographic footprint of the Southeast, and in response to requests from regional stakeholders, NIDIS launched a newly expanded Southeast DEWS in 2020. This Southeast DEWS will build on the partnerships and successes from the ACF River Basin and Coastal Carolinas DEWS, while replacing these two DEWS with a larger geographic footprint that allows for enhanced information sharing across this unique region. The Southeast DEWS is a collaborative federal, regional, state, and local interagency effort to improve drought early warning capacity and build long-term drought resilience throughout the region.

END_OF_DOCUMENT_TOKEN_TO_BE_REPLACED

The following table highlights activities in the Southeast that are ongoing efforts related to drought, involve multiple partners, serve as a unique way to address regional drought needs, and are related to at least one of the components of drought early warning. Please contact Meredith Muth (meredith.f.muth@noaa.gov) for more information about the table or to inquire about getting an activity added to the list.

The Coastal Salinity Index (CSI) was developed as a way to characterize coastal drought by monitoring the freshwater-saltwater interface. The tool is intended to improve understanding of the…

The purpose of this project is to provide organic soil moisture data and information to aid coastal zone fire risk monitoring and management. Current and archived data from these stations are…

This is an assessment of current drought impact reporting practices across the Southeast region, focusing on agricultural impacts, with the goal of improving access, collection, synthesis, and…

When monitoring drought, it is important to look at data across the spectrum—from the atmosphere, land surface, and water availability below the surface. The list of data and maps below has been customized for the Southeast, and provides a snapshot of conditions across that spectrum—including precipitation and temperature departure data, streamflow, soil moisture, groundwater, and various derived indices for monitoring drought in the region. Monitoring for the impact of drought is also important, and resources to submit conditions and/or impacts and view conditions are provided.

A one-stop shop tool that places recent temperature and precipitation conditions in both a historical and geographical perspective across the Southeast.

This condition monitoring map is a tool intended to depict local, community-level conditions and how recent weather and climate events have affected those communities.

Soil moisture conditions at the daily and monthly scales depicting total soil moisture, percentiles and anomalies, as well as monthly and seasonal change.

When will drought affect me? How long could it last? This section includes resources for drought prediction and forecasting on what could be ahead, including the short-term (e.g., 8-14 day forecast), seasonal to subseasonal (e.g., monthly) and future climate projections (e.g., mid-century). The appropriate time scale will depend upon how this information is being used (e.g., drought response, mitigation management action, long-term planning). Weather and climate prediction is an evolving science, as researchers continue to find ways to improve models and forecasting capabilities at various time scales.

NCEI provides precipitation data that can be used to show probability or the amount of precipitation to ameliorate or end a drought at different monthly scales.

Soil moisture conditions at the daily and monthly scales depicting total soil moisture, percentiles and anomalies, as well as monthly and seasonal change.

If you are interested in joining the Southeast DEWS listserv to share drought-related information across the Southeast, please email Meredith Muth (meredith.f.muth@noaa.gov).

Research to better understand drought in the Southeast and its development, persistence, improvement, and interaction with other hazards is critical to providing timely and reliable information, products, and services in support of early warning. This page highlights research projects that are studying drought in the Southeast region, with support from NIDIS.