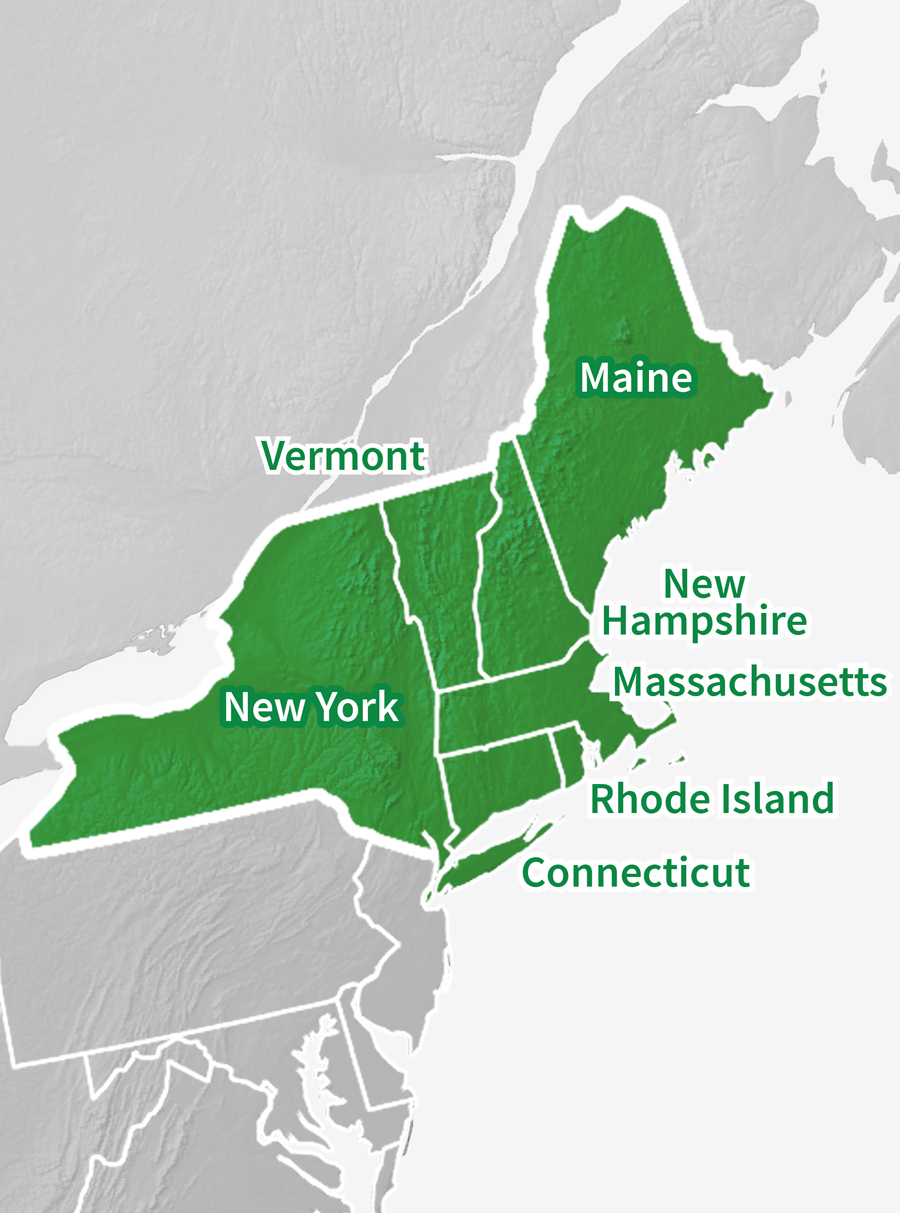 The Northeast DEWS consists of the New England states and the state of New York. Known best for its autumn foliage, thick forests, rocky soils, and abundant freshwater resources, the northeastern United States is characterized by a diverse climate that is not often associated with drought. However, in 2000, 2016, and 2020, New York and New England experienced historic drought conditions not seen since the 1960s. The Northeast also frequently experiences “flash” droughts—short-term intense dry periods that can follow a period of normal to above-normal precipitation. While these flash droughts may last only 2–6 months, they can have profound impacts on a local region, resulting in shortages in public water supplies and very low streamflows. The Northeast DEWS is a collaborative federal, regional, state, and local interagency effort to improve drought early warning capacity and build long-term drought resilience throughout New England and New York.

The 2022–2026 Northeast Drought Early Warning System (DEWS) Strategic Action Plan documents regionally identified needs and offers a guide for future activities that will improve drought early warning and preparedness in the Northeast DEWS. Partners from across New England and New York attended virtual listening sessions in late 2020 and 2021 to discuss progress made and identify next steps and priorities for the region.

END_OF_DOCUMENT_TOKEN_TO_BE_REPLACED

The following table highlights activities in the Northeast that are ongoing efforts related to drought, involve multiple partners, serve as a unique way to address regional drought needs, and are related to at least one of the components of drought early warning. Please contact Sylvia Reeves (sylvia.reeves@noaa.gov) for more information about the table or to inquire about getting an activity added to the list.

In 2020, the Northeast DEWS team held listening sessions among its partners and stakeholders in New York and New England. The focus of the sessions was to…

This objective of this project, led by researchers from the Desert Research Institute, University of Colorado, and Cornell University, was to identify the most effective drought indicators for…

When monitoring drought, it is important to look at data across the spectrum—from the atmosphere, land surface, and water availability below the surface. The list of data and maps below has been customized for the Northeast, and provides a snapshot of conditions across that spectrum—including precipitation and temperature data, streamflow, condition monitoring, and various derived indices for monitoring drought in the region.

Climate Maps and Data from HPRCC

HPRCC produces daily climate maps using data from the Applied Climate Information System (ACIS). The maps and data can be accessed and downloaded from the HPRCC website.

This condition monitoring map is a tool intended to depict local, community-level conditions and how recent weather and climate events have affected those communities.

When will drought affect me? How long could it last? This section includes resources for drought prediction and forecasting on what could be ahead, including the short-term (e.g., 8-14 day forecast), seasonal to subseasonal (e.g., monthly) and future climate projections (e.g., mid-century). The appropriate time scale will depend upon how this information is being used (e.g., drought response, mitigation management action, long-term planning). Weather and climate prediction is an evolving science, as researchers continue to find ways to improve models and forecasting capabilities at various time scales.

Research to better understand drought in the Northeast and its development, persistence, improvement, and interaction with other hazards is critical to providing timely and reliable information, products, and services in support of early warning. Below are featured research projects that are studying drought in the Northeast region, with support from NIDIS.

Identifying and Quantifying Triggers, Time Scales, and Tools to Support Management of Different Drought Types in the Northeastern United States
Developing Drought Triggers and Indicators Using the National Water Model: A Case Study to Improve the U.S. Drought Monitor in Support of the Northeast DEWS