Drought Stories from Hawai'i: A Workshop on Drought Recovery

Over 30 participants from 18 different organizations gathered at the East-West Center on Tuesday July 23 for the NOAA NIDIS (National Integrated Drought Information System) workshop on Drought Recovery in Hawai‘i. The day was broken up into four sessions, which included a mixture of oral presentations and facilitated discussions in breakout groups. The morning session featured “talk story” presentations from local resource managers and practitioners, telling stories about how drought has impacted them from different perspectives, including water resources, ranching, ecosystems, wildfire, and traditional Hawaiian knowledge. 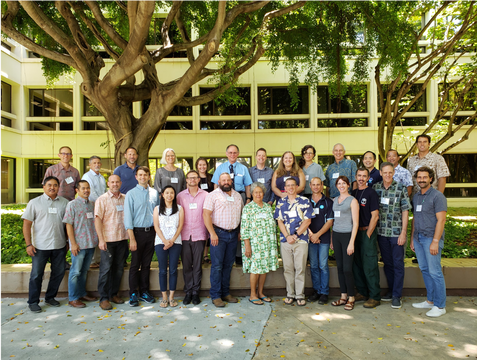 Through these stories participants learned about how it can take 10+ years for ranchers in Hawai‘i to recover from a major drought event with severe economic consequences for the agricultural sector. In dry forest areas, weeds that became problematic during drought are still present 10 years later, and drought contributes to other stressors that can push native species over the edge. In the dry leeward areas, native Hawaiians would use canoes and troughs to collect water in caves for use during drought and relied on groundwater springs for fresh water. The beginning of a drought, especially if preceded by wet conditions, can lead to a very severe fire season; the 2012 fire year, for example, cost the state $3 million. While most large groundwater systems in Hawai‘i are fairly resistant to drought, water catchment users are heavily impacted and are seen as the “canary in the coal mine” for drought.

In the second session, participants were given maps of the top five recent drought events that affected Hawai‘i, and used these maps as context to describe historical drought impacts, identify information sources used and actions taken, and assess what worked, in terms of information, communication, and effectiveness of actions). The U.S. Drought Monitor was identified as an important go-to source for current drought information in Hawai‘i. Other indicators included low stream levels, the status of certain vegetation, such as grass or wiliwili (Erythrina sandwicensis) leaves, and the status of catchment systems. Large-scale plantation agriculture used to serve as another important indicator, however, with the closure of the last sugarcane plantation, this important indicator is being lost. It was also noted that for drought, there is a big disconnect between the population center in Honolulu and where the largest drought-impacted lands are located (on Maui and Hawai‘i Island).

The third session featured presentations on available products, both on the mainland and in Hawai‘i, which fed into the final breakout group session where participants discussed information needs and what tools should be developed for drought monitoring in Hawai‘i. 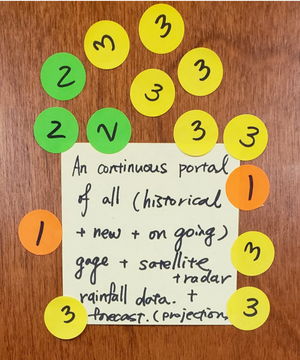 During the fourth session, participants identified several important enhancements, modifications, or new tools they would like to see for the Islands. Participants wrote their top ideas on post-its, and everyone was given colored dots to vote on their top three. A few noteworthy requests:

Finally, a discussion was held about future opportunities for engagement with users in Hawai‘i and potential funding opportunities. It is the hope and intention of both NCEI and NIDIS to circle back with this group over the course of the next several months to continue exploration of drought needs and requirements in Hawai‘i.

More information on drought in Hawai’i:

How Drought Prone Is Your State? A Look at the Top States and Counties in Drought Over the Last Two Decades