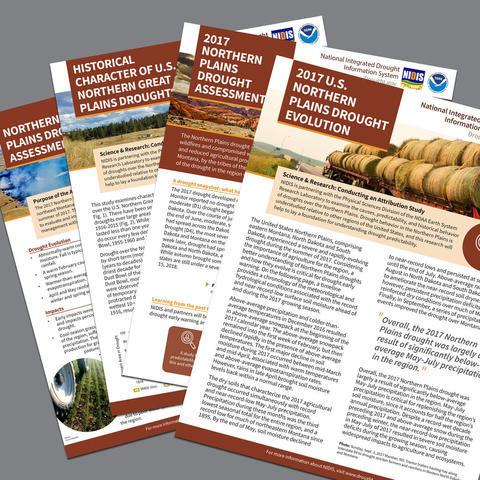 The Physical Sciences Division (PSD) of the NOAA Earth System Research Laboratory, in partnership with NIDIS, is conducting a year-long study examining the 2017 Northern Plains Drought. The study is examining the causes, evolution, and predictability of last year’s drought across much of Montana and the Dakotas, evaluating the historical behavior of droughts over this region, and determining what role, if any, climate change may have played. The results of this research will help to lay a foundation for better understanding drought predictability in the Northern Plains, a region thus far lacking in drought behavior research.

As the research for this study has progressed, PSD and NIDIS have issued a series of short summary reports describing the study and summarizing the research. The most recent of the summaries, published on August 8, 2018, examines the Predictability of the 2017 Northern Plains Drought. Researchers reported that the standard forecast framework used to predict the development of severe droughts, the North American Multi-Model Ensemble (NMME), did not provide credible early warning for the 2017 drought. This was due in part to low precipitation prediction skill for May-July, which is a critical time of year for the region: almost half of its  annual precipitation falls during May through July, which is also the region’s major growing season.

Another summary, issued on June 25, evaluated the Evolution of the 2017 Drought. The research revealed that the “2017 Northern Plains drought was largely a result of significantly below-average May-July precipitation in the region…[which] is critical for replenishing the region’s soil moisture, since it accounts for half the region’s annual precipitation”.

Researchers also found that, “despite a record-wet decade preceding 2017 and above-average snow during the preceding winter, the near-record-low precipitation in May-July of 2017 resulted in severe soil moisture deficits during the growing season, causing widespread impacts to agriculture and ecosystems”.

In addition to PSD’s Attribution Study, a group of stakeholders from North Dakota, South Dakota, and Montana are, in collaboration with NIDIS, producing a Drought Impact Assessment of the 2017 Northern Plains drought. This impact assessment will review how the drought evolved so quickly and without much warning, what impacts the drought caused, and lessons learned from last year’s drought. This assessment will reveal data or research gaps, best practices, and what challenges stakeholders faced in responding to the drought, all with the goal of learning from the 2017 drought and making the region better-prepared and more resilient to subsequent droughts.

CDC Releases ‘Preparing for the Health Effects of Drought: a Resource Guide for Public Health Officials’

Dry Times Is Back - and It Has a New Look!