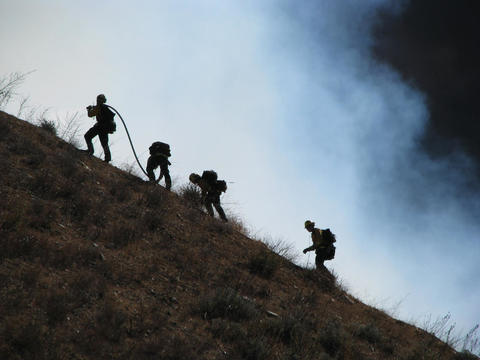 California and Nevada’s climate and weather patterns create fire-prone environments for many wildland–urban interface communities, highlighting the value in understanding the relationships between drought and wildfire. More specifically, information is needed on how drought indices are related to fire danger outputs that are commonly used in fire management.

With NIDIS Coping with Drought support through NOAA’s Sectoral Applications Research Program (SARP), recent research led by Dr. Dan McEvoy from the Western Regional Climate Center and the Desert Research Institute examined the relationships in California and Nevada between common drought indices and National Fire Danger Rating System (NFDRS) outputs to help understand what drought indices might complement or be integrated into NFDRS. This type of information can help inform the Predictive Services’ significant fire potential outlook that are currently issued at both weather and seasonal time scales and funding requests during periods with potential for abnormally severe fire behavior.

Results show a combination of drought indices is needed since large variability was found when looking at subregions of California and Nevada and there was not a single drought index “champion” for the entire region. Drought indices that incorporate both evaporative demand (the “atmospheric thirst”) and flexible time scales have the most promise to help improve seasonal fire potential outlooks. The study also examined the evaporative demand drivers—temperature, humidity, wind speed, and solar radiation—leading to the large and destructive October 2017 Tubbs Fire, at the time the most destructive fire in California history. A shift in the evaporative demand dominant drivers from high temperature earlier in the summer during a heat wave to low humidity several days before the start of the fire signaled increasing fire potential.

This project highlights the value of connecting drought researchers to the fire management community as part of a Drought Early Warning System (DEWS). An ongoing partnership between this research team and Predictive Services in northern California led to beta-testing the use of the Evaporative Demand Drought Index (EDDI) as a management tool during the summer and fall of 2018. Initial feedback indicates that EDDI was useful in determining set-up conditions prior to the Carr Fire (23 July) near Redding, California, and the Camp Fire (8 November) in Paradise, California. Both fires were among the top 20 largest in California history and the Camp Fire was by far the most destructive in history with 85 deaths and nearly 19,000 structures destroyed. The research team is now working on next steps to more fully integrated drought information and forecasts including using operational EDDI maps to replace the U.S. Drought Monitor in U.S. Forest Service Region 5 severity funding requests and use of EDDI graphics in Predictive Services’ seasonal fire potential outlooks.

To learn more, please join us May 28 on the California-Nevada Drought Early Warning System Drought & Climate Outlook Webinar where Dr. Dan McEvoy will be presenting on this work or read more about related activities in the NIDIS Drought and Wildland Fire Nexus (NDAWN) Strategic Plan.