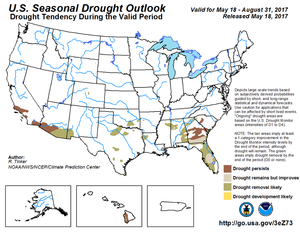 NOAA Meteorologist Rich Tinker authored the map for May 18 through August 31, 2017. His summary:

Drought coverage across the country has progressively declined over the past several months, as assessed by the U.S. Drought Monitor. At the end of November 2016, drought encompassed more than one-quarter of the nation. That number dropped below 12 percent at the end of March 2017, and to 4.2 percent in early May, the least coverage since Drought Monitor statistics were first calculated at the beginning of 2000.

In the last four weeks, drought was alleviated in substantial parts of the Northeast, Middle Atlantic States, and south-central Plains. However, latent long-term moisture shortages remain across the Northeast, and drought could re-develop quickly should any substantial period of abnormal heat and dryness occur.

As of May 18, 2017, drought covers much of Florida, Georgia, and eastern Alabama, with extreme drought affecting the central Florida Peninsula and portions of both southern and northern Georgia. Scattered areas of drought exist elsewhere across the southern tier of states from South Carolina to central Texas.

In the contiguous states, drought is expected to persist or intensify in southern California and southwestern Arizona, where above-normal temperatures and seasonably dry conditions are expected. Drought persistence is also favored from west-central Georgia into central and northeastern South Carolina dur to seasonal topsoil decline, and less rainfall expected through the rest of the month than in neighboring areas. At least some improvement is expected in other drought areas.