The National Drought Mitigation Center (NDMC) produces VegDRI in collaboration with the US Geological Survey's (USGS) Center for Earth Resources Observation and Science (EROS), and the High Plains Regional Climate Center (HPRCC). Main researchers working on VegDRI are Dr. Brian Wardlow, with the Center for Advanced Land Management Information Technologies (CALMIT), and Dr. Tsegaye Tadesse at the NDMC, and Jesslyn Brown with the USGS. NDMC and CALMIT are both based in the School of Natural Resources at the University of Nebraska-Lincoln. VegDRI was developed with sponsorship from the US Geological Survey (USGS), the US Department of Agriculture's (USDA) Risk Management Agency (RMA) and from NASA. Continued operational production of VegDRI is supported by the USGS.

VegDRI maps are produced every two weeks and provide regional to sub-county scale information about drought's effects on vegetation. In 2006, VegDRI covered seven states in the Northern Great Plains (CO, KS, MT, NE, ND, SD, and WY). It expanded across eight more states in 2007 to cover the rest of the Great Plains (NM, OK, MO, and TX) and parts of the Upper Midwest (IA, IL, MN, and WI). VegDRI expanded to include the western U.S. in 2008 (WA, ID, OR, UT, CA, AZ, NV). In May 2009 VegDRI began depicting the eastern states as well, covering the entire conterminous 48-state area.

The VegDRI calculations integrate satellite-based observations of vegetation conditions, climate data, and other biophysical information such as land cover/land use type, soil characteristics, and ecological setting. The VegDRI maps that are produced deliver continuous geographic coverage over large areas, and have inherently finer spatial detail (1-km2 resolution) than other commonly available drought indicators such as the U.S. Drought Monitor. 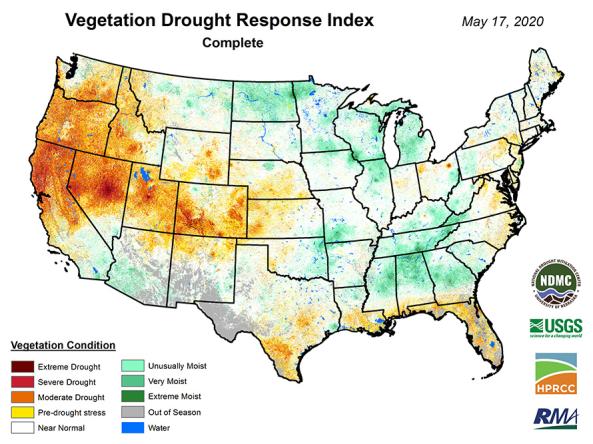