After a soggy start, California and Nevada remain in drought as the wet season comes to a dry close

California/Nevada conditions as of March 8, 2022:

Normal Water Years' Worth of Missing or Excess Precipitation 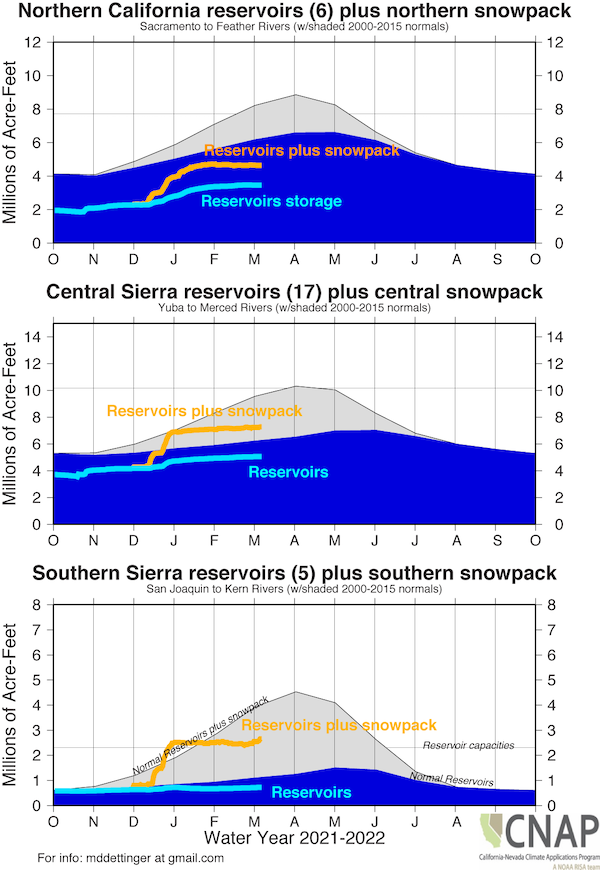 NOAA’s ENSO alert system status is currently a La Niña Advisory. La Niña is favored to continue into the Northern Hemisphere summer (53% chance during June–August 2022), with a 40%–50% chance of La Niña or ENSO-neutral thereafter. For more information, please check out the NOAA ENSO blog.

According to the NOAA National Weather Service’s Climate Prediction Center, the next three months’ forecasts show drought persisting across California and Nevada as equal chances above/below/normal to below-normal precipitation are forecasted across the region. Equal chances of above/below/normal to above-normal temperatures are also forecasted. Updated forecasts will be released on Thursday March 17th by the National Weather Service.

The Center for Western Weather and Water Extremes’ latest outlook shows disagreement amongst the forecast models on atmospheric river activity in the coming weeks. However, models show moderate-to-high confidence in ridging activity off the coast of California, indicating a drier California.