Southern California-Nevada Benefits from the Monsoon, but Severe Drought (D2) or Worse Continues.

California/Nevada conditions as of August 16, 2022: 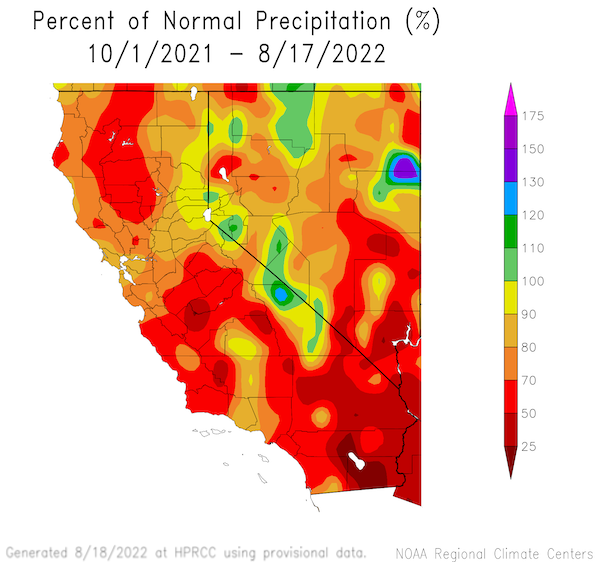 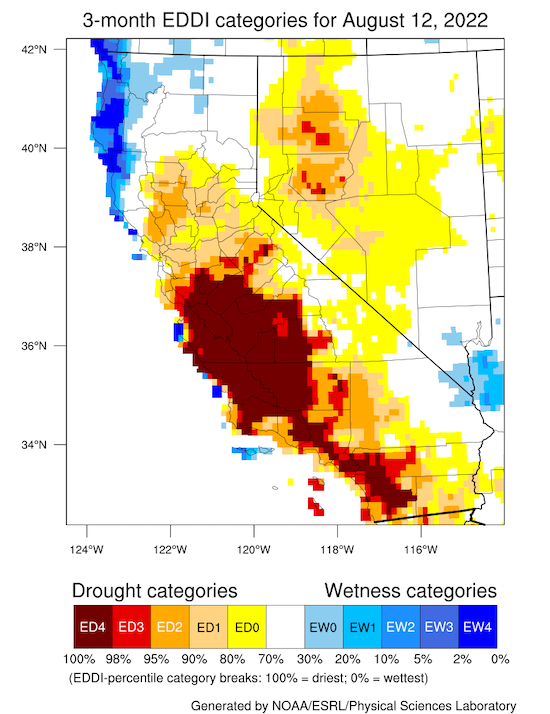 NOAA’s ENSO alert system status is currently a La Niña Advisory. La Niña is expected to continue, with chances for La Niña gradually decreasing from 86% in the coming season to 60% during December 2022–February 2023. For more information, check out the NOAA ENSO blog and how La Niña impacts the Western U.S.

The National Weather Service’s Climate Prediction Center is forecasting above-average temperatures for most of the U.S., including California-Nevada, for September through November. For the same time period, precipitation in California-Nevada is forecasted to be below normal to equal chances of below/normal/above. Through the end of August, dynamical models strongly favor a continuation of enhanced rainfall across the monsoon regions of the Southwest, while drought persistence is favored for the West ahead of the core wet season.

According to the National Interagency Fire Center, large fires began to emerge in northern California towards the end of July as lightning followed prolonged hot and dry conditions. Northern California is expected to have above-normal significant fire potential through August into September. Above-normal potential is also expected in portions of the central and southern Sierra and foothills, as well as the central California coast through September. By October, only downslope wind favored areas of northern and southern California are forecast to have above-normal potential, with areas in southern California retaining potential in November. Critically flammable vegetation, in both the live and dead fuel types, will occur at times across a broad area of Northern California but will especially impact central and eastern areas during August, with less confidence in the trends for September and October. Near- to above-normal herbaceous fuel loading is found across the landscape and will not be altered until fall or winter storms begin. Other uncertainties regarding fuels that impact significant fire potential include large areas of blow-down with cured leaves and needles due to the intense December storms across portions of the Tahoe, Eldorado, and Six Rivers National Forests, as well as increased tree mortality that has returned in higher numbers compared to recent years due to the extended significant drought.