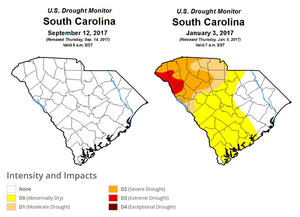 On New Year’s Day 2017, almost three-quarters of South Carolina was abnormally dry or in drought, according to the U.S. Drought Monitor. Conditions improved significantly by summer, with 99.9% of the state at normal levels by mid-June. However, hazard planners and state agencies seized the opportunity to learn from what could have become a much more serious situation.

Taking to heart the theory that the best time to plan for drought is when there isn’t one, the SC Department of Natural Resources State Climatology Office, Carolinas Integrated Sciences and Assessment (CISA, a NOAA RISA Program), the SC Emergency Management Division, and the SC Water Resources Center together organized the first South Carolina Drought/Water Shortage Tabletop Exercise on September 27.

The event, held in West Columbia, SC, brought together agencies and organizations charged with responding to drought, including state and federal agencies, water utilities, and industry members. Objectives of the meeting included identifying and understanding the strengths and breaking points in the statewide and local drought plans and procedures; improving awareness of local, state, and federal players in South Carolina’s drought response; identifying key mission areas for emergency support functions; and collecting ideas for future exercises. The tabletop highlighted the need to review local drought ordinances and state statutes, to update the existing drought response procedures, and to establish better communication networks between agencies and other water managers in the state.

Find out more about this exercise and another involving public health in CISA’s quarterly newsletter, the Carolinas Climate Connection.

Learn more about tabletop exercises held in other states.