The Missouri River Basin (MRB) Drought Early Warning System (DEWS) Strategic Action Plan outlines priority tasks and activities to build drought early warning capacity and resilience. In early 2017, meetings were held to update the existing strategic plan, including a new focus on enhancing tribal capacity to use drought information and the use of new tools and drought indicators across the region. Before that plan could be finalized, drought quickly engulfed the Northern Plains region. The effects of the 2017 Northern Plains flash drought motivated NIDIS to coordinate multi-agency assessments of its impacts, causes, and predictability; the U.S. Army Corps of Engineers to renew their efforts to strengthen soil moisture monitoring in the region; and impacted states to examine their response plans. In this context, partners from across the MRB met in Billings, MT, in August 2019 to discuss next steps. Four priorities and a series of outcomes and actions organized by the five components of a DEWS were identified to be part of the next iteration of a MRB Strategic Action Plan.

The four priorities identified were:

The plan contains activities that the MRB DEWS network will initially focus on, organized by components of a drought early warning system. Annual meetings will be used to reassess priorities and direct action within the DEWS during the life of the plan. 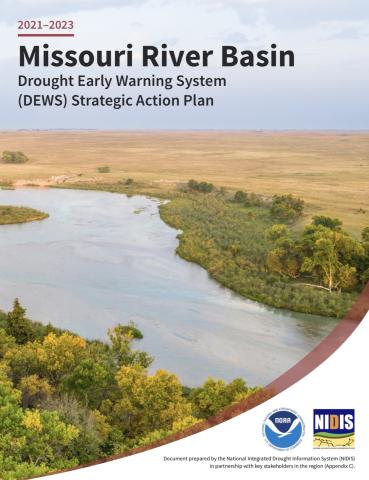