Register here for the June 2 Drought Update and Wildfire Outlook Webinar for California and the Southwest.

Normal Water Years' Worth of Missing or Extra Precipitation 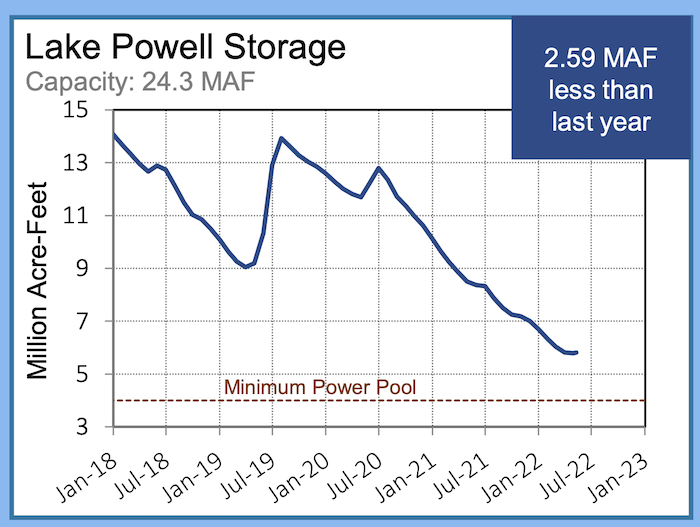 NOAA’s ENSO alert system status is currently a La Niña Advisory. Though La Niña is favored to continue, the odds for La Niña decrease into the late Northern Hemisphere summer (58% chance in August–October 2022) before slightly increasing through the Northern Hemisphere fall and early winter 2022 (61% chance). For more information, check out the NOAA ENSO blog.

The National Weather Service’s Climate Prediction Center is forecasting above-average temperatures for most of the U.S., including California-Nevada, for May through July. For the same time period, precipitation is forecasted to be below normal to equal chances except in those areas impacted by the Monsoon as an enhanced early Monsoon is slightly favored across parts of the Southwest. When extended periods of below-normal precipitation overlap with extended periods of above-normal evaporative demand—which is influenced by above-normal temperatures as well as clear skies, wind speed, and low humidity—fuels can become critically dry, favoring rapidly spreading wildfires. (Read more here from CNAP).

According to the National Interagency Fire Center, fire activity increased markedly in the Southwest and also continued to increase in California, the Great Basin, Eastern Area, and across the plains of the Rocky Mountain Area. The national preparedness level remains at two with the increased fire activity in the Southwest and the forecast increased fire potential in May. As of May 1, most of the Southwest is forecast to have above-normal significant fire potential in May and June, with potential increasing across southern and western Colorado and southern portions of the Great Basin before returning to normal in July. Above-normal significant fire potential is also forecast to increase across northern California from May into July, with rising potential likely along portions of the Sierra Front.