Drought Update for Puerto Rico and the U.S. Virgin Islands

NIDIS and its partners will issue these updates every two months.

﻿Moderate to Extreme Drought Persists Across Puerto Rico and the U.S. Virgin Islands.

Drought conditions have improved over the past month across most of Puerto Rico, with only the northwest and southwest coast seeing drought intensifying. The U.S. Virgin Islands remain mired in severe (D2) to extreme (D3) drought conditions. Historically, August to November are the 4 consecutive months with the highest average rainfall. Therefore, drought conditions are expected to improve in all areas of Puerto Rico and the Virgin Islands as we move into the fall season. Areas currently experiencing drought should see improvement.

View the update in Spanish. 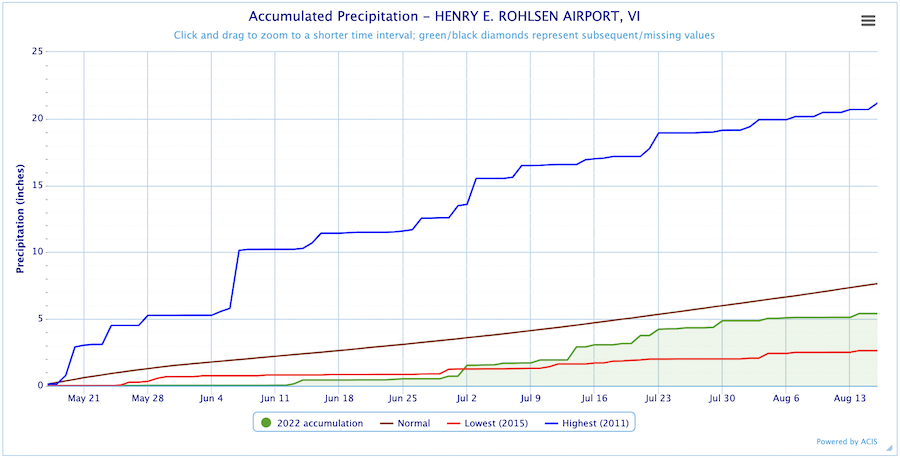 The 28-day average streamflow from the U.S. Geological Survey (USGS) river gauge network (Figure 7) indicates that nearly all streamflows across the interior of the island are at or above normal. In contrast, along the south-central coast, the Rio Jacaguas at Juana Diaz is at record low values. The Rio Grande de Loiza below the Loiza Damsite is also in the bottom 10% for streamflow values for mid-August.

Well levels are below-normal to record low in south-central, southeastern, and north-central Puerto Rico. Across all the U.S. Virgin Islands, groundwater levels are near normal (Figure 8).

Based on the 3-month extended forecast by the Caribbean Climate Outlook Forum (CariCOF), there are higher chances of observing either above normal or normal rainfall for the August to October time period. With this coinciding with the historically wettest three-month period of the year, this should result in significant drought improvement going into December and the start of the dry season (Figure 9).

USVI Reporting Input: Several individuals contributed to this report, and we are acknowledging the following for their support, including the faculty, staff and collaborators of the UVI Physics Program, UVI Etelman Observatory, UVI Agricultural Experiment Station, VI Department of Agriculture, as well as the USDA Office Chief Economist, National Parks Service in St. Croix, USDA Farm Service Agency, Coral Bay Community Council, and the many field staff, volunteers, drought reporters and farmers from across the territory.

This drought update is issued in partnership between the National Integrated Drought Information System (NIDIS), National Oceanic and Atmospheric Administration (NOAA) National Weather Service, the U.S. Department of Agriculture (USDA), and the University of the Virgin Islands. The purpose of the update is to communicate a potential area of concern for drought expansion and/or development within Puerto Rico and the U.S. Virgin Islands based on recent conditions and the upcoming three-month forecast.

NIDIS and its partners will issue these updates every two months. Subscribe for these U.S. Caribbean drought updates here.

University of the Virgin Islands (UVI)