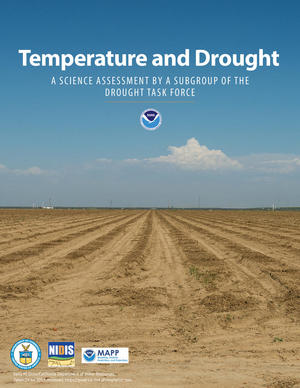 The development of drought is a complex process that involves multiple, interwoven relationships between precipitation, land surface temperatures, soil moisture, humidity, and atmospheric patterns. Often, drought is typified by the combination of a lack of precipitation and hot temperatures. However, the exact relationship between the two is not yet fully understood, nor is the role that temperature plays in the development of drought.

In an effort to better understand temperature, and its relationship with drought, NOAA’s Modelling, Analysis, Predictions, and Projections (MAPP) Program Drought Task Force set out to research how temperature factors into the development of drought. This research was just completed and published last week, available on the MAPP website: Temperature and Drought: A science assessment by a subgroup of the Drought Task Force.

The particular challenge that the Drought Task Force faced was something of a chicken-and-egg dilemma; droughts are driven and exacerbated by high temperatures and land surface dryness, but when is temperature the leading driver of a drought, and when is it a response to dry conditions?

There is an interesting relationship between surface temperatures and surface moisture, known in the scientific community as the Bowen ratio; when the ground is dry, incoming solar radiation will heat the land more than it would have otherwise. This can also be explained as follows: when the ground is dry, heat from the sun does not have to expend energy to evaporate the already-dry soil, and instead heats the air to a more intense degree, causing air temperatures to rise.

This relationship suggests that dry soils can drive a rise in temperature, like a heat wave. However, on the flip side, hot temperatures can accelerate the evaporation of moisture in the ground (also known as high evaporative demand), which dries out the surface, which, in turn, can lead to a feedback loop of increased surface temperatures and heat waves. There are other factors, as well, that further complicate and blur the dynamics of heat and moisture; relative humidity and winds also play a role in depleting or sustaining surface moisture.

Follow this link to read the full report: Temperature and Drought: A science assessment by a subgroup of the Drought Task Force is the product of a partnership between the NOAA Earth System Research Laboratory, MAPP, NIDIS, and the NOAA Climate Program Office.