Megadroughts in the Common Era and the Anthropocene

In recent years, severe droughts have affected many regions around the world, including western North America, Europe, East Africa, and China. In some cases, these events (and others) have been referred to as "megadroughts," a term increasingly used in the media and scientific literature to refer to almost any extreme or impactful drought event. There is little consensus in the scientific community, however, on when a drought becomes a megadrought, nor is there any quantitative or established definition. A recently published paper by a team of international scientists synthesized information from the paleoclimate record, observations, and climate models to summarize our current understanding of megadrought dynamics around the world, from the last two thousand years to the end of the current century (Cook et al., 2022). What is a megadrought? Where in the world do they occur? And what are the consequences of climate change for megadrought risk and severity?

The term megadrought likely originated from studies of drought in the paleoclimate record over western North America. In this region, records from lake sediments, tree rings, and speleothems revealed major drought events in the years prior to 1600 CE, droughts much more extreme and persistent than even the worst events of the 20th century. In the late 1500s, for example, much of the southwest and central U.S. experienced a multi-decadal drought over twice as long as any drought events observed in recent history. Using these events and this region as a starting point, the researchers suggested the following definition for megadroughts: persistent, multi-year drought events that stand out as especially extreme in terms of severity, duration, or spatial extent when compared to other droughts over the last two thousand years.

Using this definition and reviewing the paleodrought literature, the researchers found strong evidence for megadrought events over the last two millenia in regions on every continent outside of Antarctica (Table 1; adapted from Cook et al., 2022). These include relatively well known megadroughts that affected ancient societies in Central America and Northern China, as well as more recently discovered events in western Australia and Europe. Recent advances in model-data comparisons and data assimilation have further increased our understanding of what caused these megadroughts, highlighting how many of these events can be linked to shifts in tropical ocean temperatures. Many of the medieval-era megadroughts in North America and southern South America, for example, can be linked to extended cold ocean temperatures in the tropical Pacific (Steiger et al., 2021). These ocean conditions, often associated with La Niña, typically cause drought in these two regions, but the evidence suggests they were especially long-lived during past megadroughts. This review demonstrates that megadroughts are not geographically isolated or incredibly rare events, but rather an intrinsic feature of hydroclimate variability in many regions. But what about the future?

Climate models project that many of the regions with most robust past megadrought activity (e.g., western North America, the Mediterranean and Europe, southern South America) are also regions where climate change is likely to increase drought severity and risk with warming. In some regions this drying will manifest primarily through reductions in rainfall and snowfall, but for most areas increases in drought risk will be caused by a warmer, more arid atmosphere increasing water losses from the surface. Indeed, for some regions we are already beginning to see these climate change effects manifest. Southwestern North America, for example, has been experiencing an ongoing megadrought since 2000, the driest 22 to 23 year period of the last 1200 years (Williams et al., 2020; 2022). Further, climate change amplified the severity of this megadrought, contributing ~40% of the total magnitude of this event. Consequently, climate change turned what would have otherwise been a modest, if impactful, drought, into one of the worst droughts of the last two millennia.

Frustratingly, there remain some major gaps in our knowledge and uncertainties that need to be resolved to improve confidence in our understanding of megadrought dynamics and their impacts. For example, many areas of the world (e.g., tropical South America, much of subsaharan Africa) lack long-term observational or paleoclimate records of drought. In such regions, it is therefore difficult to understand what the baseline drought and megadrought risks are. Additionally, the climate models we use for projecting future drought risk have significant uncertainties, especially in the representation of vegetation at the land surface. Finally, it is not clear how effective our adaptation and resilience capacities will be in the face of future droughts and megadroughts, events that will likely be hotter and more intense than anything in recent memory. Given the massive impacts on ecosystems and water resources of the ongoing megadrought in Southwestern North America, however, it is likely that future megadroughts in this and other regions will present substantial challenges. 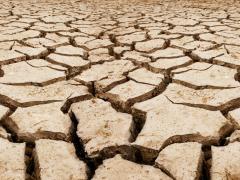 NIDIS Awards Over $5.7 Million for Projects on Ecological Drought and Tribal Drought Resilience