Although numerous studies have previously explored streamflow responses to annual climate warming, less attention has been given to the differing effects of seasonal (winter vs. summer) warming. It is well-known, for instance, that the seasonal timing of streamflow in snow-affected river basins is strongly affected by warmer winters, which lead to less snow, more rain, and earlier runoff. What has been less understood is how the total volume of runoff changes in a warmer climate, and in particular how the total (annual) streamflow volume responds to warmer winters as contrasted with warmer summers.

To address this gap, UCLA’s Land Surface Hydrology Group examined western U.S. streamflow declines in response to climate warming and found they are expected to be asymmetric depending on the season in which most warming occurs. Cooler river basins (which are especially dependent on spring snowmelt) are more sensitive to warmer warm seasons, while warmer river basins (with less snow) are more sensitive to cool season warming. Funding for the research was provided by NIDIS and the California-Nevada Adaptation Program, a NOAA CAP/RISA team.

The results, detailed in two recent Water Resources Research papers, are based on predictions of annual streamflow changes resulting from warm (April–September) and cool (October–March) season warming in five large river basins, and 616 smaller ones, across the western United States.

“Our research shows that cooler river basins tend to have larger streamflow declines when warming occurs in the warm season than in the cool season, while the changes are reversed in warmer river basins (i.e., those with less snow). This is linked primarily to the basins’ sensitivity of evapotranspiration to temperature,” according to Zhaoxin Ban, the first author of both papers.

In the second paper, the authors analyzed 616 river basins across the western U.S. with drainage areas mostly in the range from 100 to 1000 km2. Of those 616 river basins, 44% are more sensitive to warm season than cool season warming. Those river basins are mainly inland and/or high latitude (north of 37.5°N) and (mostly) at relatively high elevations, many of which are in the northern Columbia River Basin and the Upper Colorado River Basin. About 35% show a larger sensitivity to cool season than warm season warming. They are mainly moist coastal river basins, or low-latitude, and moderately warm.

The remaining basins (about 20%) are either arid (e.g., bordering on the Mojave and Sonoran Deserts, or basins that drain into the Great Basin) or cold with long snow seasons. These basins are predicted to experience annual streamflow increases for a variety of reasons, including long-term snowpack declines that result in earlier runoff occurring at a time of year when evapotranspiration is lower, or that will experience more rapid snowmelt that penetrates into the soil and eventually will reach streams rather than evaporating. 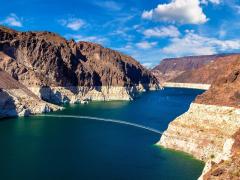 What Caused The Summer 2020 to Spring 2021 Drought in Southwestern North America? 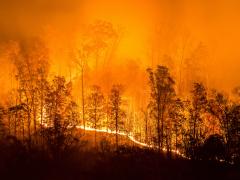