What Caused The Summer 2020 to Spring 2021 Drought in Southwestern North America?

At the end of summer 2021, the U.S. Drought Monitor reported 90% of the West in drought with 54% in Extreme Drought (D3) or Exceptional Drought (D4). Reservoir levels were low across almost the whole West, including the Colorado River Basin's Lakes Powell and Mead at just 31% and 35% of capacity, respectively. Multiple states rated most of their rangelands and pasture in poor to very poor conditions, and in October a statewide drought emergency was declared for California. Drought extended from northern Mexico into western Canada and from the Pacific Ocean to the Plains. Notably, the drought was intense in the Southwest despite large areas of above-normal precipitation in the summer of 2021. While not as severe as in 2021, drought conditions were still present in over 80% of the Southwest at the beginning of October 2022.

In a new NIDIS-funded study, a research team led by scientists from Columbia University used reanalyses and sea surface temperature-forced climate models to examine what large-scale atmosphere-ocean conditions were responsible for the onset and intensification of this latest widespread and severe drought in southwestern North America.

The study, which was published in the Journal of Climate, reveals the drought onset over summer 2020 to spring 2021 was caused by four consecutive seasons of below-normal precipitation. The driest summer on record occurred in 2020 and started the drought. This was dominated by extreme dry conditions in August. From winter 2020 through spring 2021 the worsening drought conditions were guided by the development of a La Niña in the tropical Pacific Ocean. Decadal variability in the Pacific Ocean aided drought in the southern part of the region by driving the cool-season to be drier during the last two decades. In addition, there is also evidence that the southern part of the region is drying in spring due to human-driven climate change. In conclusion, the drought onset was driven by a combination of internal atmospheric variability and interannual climate variability, while also aided by natural decadal variability and human-driven climate change.

Funding for this project was provided in part by the NOAA Climate Program Office, MAPP program and the National Integrated Drought Information System. 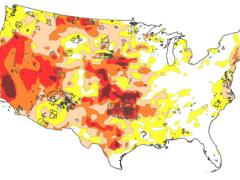 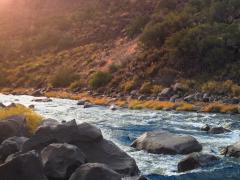