Widespread severe drought at the end of the water year leaves challenges ahead.

California/Nevada conditions as of September 14, 2021: 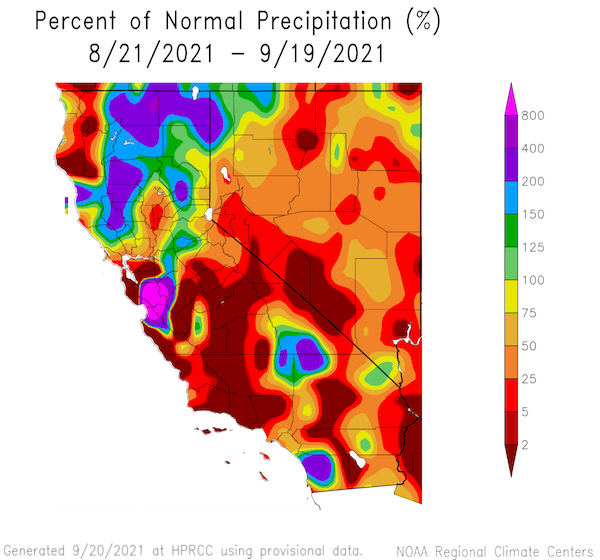 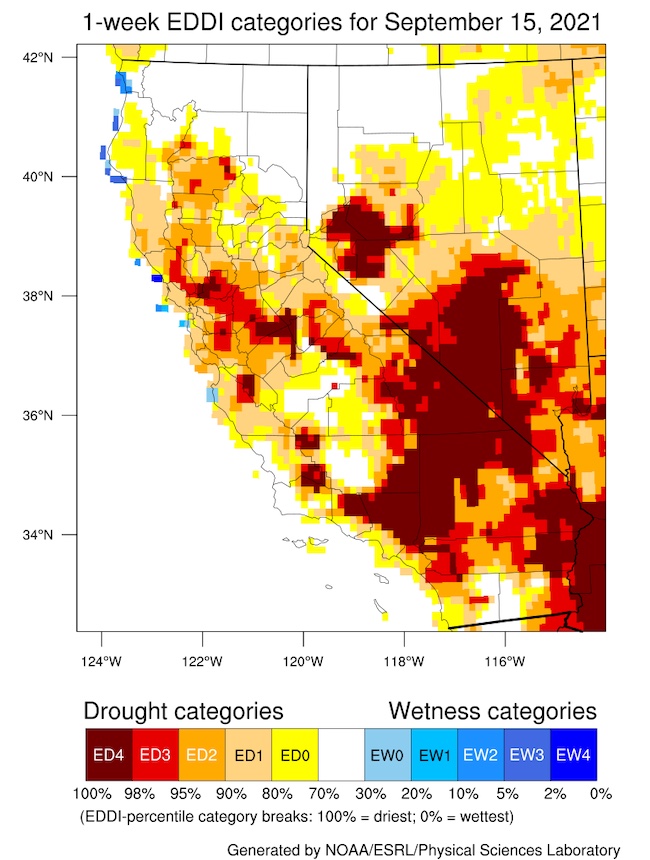 A transition from ENSO-neutral to La Niña is favored in the next couple of months, with a 70%–80% chance of La Niña during the Northern Hemisphere winter 2021–22. For more information, please check out the NOAA ENSO blog.

Forecasts for the next 1–3 months show drought persisting across California and the Great Basin, as forecasts increasingly reflect the potential for La Niña development into the fall and winter. Historically, La Niña is associated with dry to normal conditions in the southern part of California and Nevada. The October-November-December outlook from NOAA National Weather Service Climate Prediction Center is leaning to above-normal temperatures for the region, and equal chances of above-, below-, and normal precipitation with slight chances of below-normal conditions in southern California-Nevada. In the short term through early October, the outlook for atmospheric river (AR) activity indicates that California and Nevada are likely to remain dry.

Fuel moistures across California remain extremely dry in the wake of record-setting summer temperatures. Recent precipitation in portions of northern California has temporarily tempered fire danger indices that have tracked daily records for much of the summer. Yet, a large portion of the state of California is experiencing high-to-extreme fire danger conditions. The onset of cooler temperatures and increased humidity during the transition to autumn will lead to the abatement of the extreme fuel dryness conditions. However, above-normal fire potential across most forested regions of the state will persist until the arrival of more consistent long-duration precipitation events measurably allows fuel moistures to increase.

Live fuel moistures in chaparral systems in southern California have fallen below 60%—a threshold that is operationally used to categorize critical fuel moisture that enables high intensity fast-moving fires that resist fire suppression efforts. Fire activity has been relatively limited to-date across southern California; however, traditionally, large wind-driven fires have occurred in the autumn coincident with Santa Ana winds. There is limited long-term seasonal predictability for Santa Ana wind occurrence. However, critically dry fuels will be juxtaposed with limited meaningful precipitation in the next couple weeks.