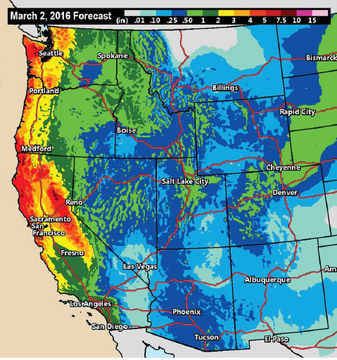 Kicked off in March 2017, the Sub-Seasonal Climate Forecast Rodeo comprised of a year-long, real-time forecasting competition. The Bureau of Reclamation sponsored the competition in partnership with the National Oceanic and Atmospheric Administration (NOAA), U.S. Geological Survey, U.S. Army Corps of Engineers, and California Department of Water Resources.

Reclamation is planning to launch Sub-Seasonal Forecast Rodeo II this summer to further improve sub-seasonal forecast skill and engage an even broader community of solvers.

Competitors submitted forecasts of temperature and precipitation for one year, competing in real-time against the other teams as well as official forecasts from NOAA. A variety of prizes were to be awarded as part of this competition, the total of which was $800,000. The prize categories were based on skill at two outlook timescales (temperature at weeks 3-4 and at weeks 5-6; precipitation at weeks 3-4 and at weeks 5-6). Teams that outperformed these benchmarks in the real-time portion of the competition and also meet hind-cast and documentation requirements were eligible for prizes.

Improved sub-seasonal forecasts for weather and climate conditions (lead-times ranging from 15 to 45 days and beyond) would allow water managers to better prepare for shifts in hydrologic regimes such as the onset of drought or occurrence of wet weather extremes. The challenge with sub-seasonal weather and climate forecasting is that it encompasses the time frame where initial state or condition information and slowly varying long-term states, such as sea surface temperature, soil moisture, and snowpack, become more important to predictions. In addition, the relative importance of the initial state or condition, versus the longer term state, depends on the lead time, region of interest, and time of year.

Year in Review: A Look Back at Drought across the United States in 2018