NIDIS and its partners release these snow drought updates for the Western U.S. every 4 weeks from December through June.

Cold, Wet Start to Western Snow Season Except in Parts of the Southwest

Snow Telemetry (SNOTEL) snow water equivalent (SWE) values for watersheds in the western U.S. as a percentage of the USDA Natural Resources Conservation Service (NRCS) 1991–2020 median. Only stations with at least 20 years of data are included in the station averages.

The SWE percent of normal represents the current SWE at selected SNOTEL stations in or near the basin compared to the median value for those stations on the same date. This map is valid as of December 12, 2022.

For an interactive version of this map, please visit NRCS.

Snow Telemetry (SNOTEL) snow water equivalent (SWE) values for watersheds in Alaska as a percentage of the USDA Natural Resources Conservation Service (NRCS) 1991–2020 median. Only stations with at least 20 years of data are included in the station averages.

The SWE percent of normal represents the current SWE at selected SNOTEL in or near the basin compared to the median value for those stations on the same date. This map is valid as of December 12, 2022.

For an interactive version of this map, please visit NRCS.

Late autumn has been cold and snowy across much of the West. The cold has been more extreme than the snow, with parts of the northern Great Basin and northern Rockies setting record low November and early December average temperatures. Cold temperatures have played a beneficial role in building early season snow in the West, with only 7% of all stations’ snow water equivalent (SWE) below the 30th percentile as of December 12. Many of the HUC6 river basins in California, Nevada, Oregon, Utah, and southern Idaho are currently at >150% of normal SWE.

Currently, the main areas of snow drought concern are New Mexico, southeastern Arizona, and parts of southern Colorado. Since the start of November, when snowpack typically begins accumulating at higher elevations, precipitation in the Sangre de Cristo Mountains and southeast San Juan Mountains has been about 60%–80% of average, resulting in below-normal SWE (see figure below). However, the situation is different in southeastern Arizona and southwestern New Mexico in the Gila Mountains, where precipitation has been above average since November 1 but SWE has been much below normal, leading to warm snow drought (below). A storm system brought 2–3 inches of precipitation to southeastern Arizona and the Gila Mountains on December 3–5, but warm temperatures restricted snowfall to above 9,000 feet, and no SWE was gained at SNOTEL sites in the area. Climatologically, this area has a much shallower and more variable snowpack than northern New Mexico and southwestern Colorado, so a few cold snow storms could quickly make up the deficit. November and early December precipitation and snowfall also were below normal across parts of northern Washington, northern Montana, and northern Idaho, with some SNOTEL stations in each state at 70%–90% of median SWE. Several of these stations in Montana and Washington satisfy “low snow” conditions (<30th percentile), indicating 70%–90% of median SWE can be near the bottom end of the distribution, as highlighted by the snow drought phase diagrams below.

In Alaska, current SNOTEL observations and snow courses from the beginning of the month indicate that SWE is mostly near- to above-normal across the state. SWE at three SNOTEL sites in South Central Alaska, all near the east end of Turnagain Arm, are at 74%–86% of normal, and SWE at one site near Cordova is just under 70% of normal.

Snow Drought Phase Diagrams for Four Sites in the West 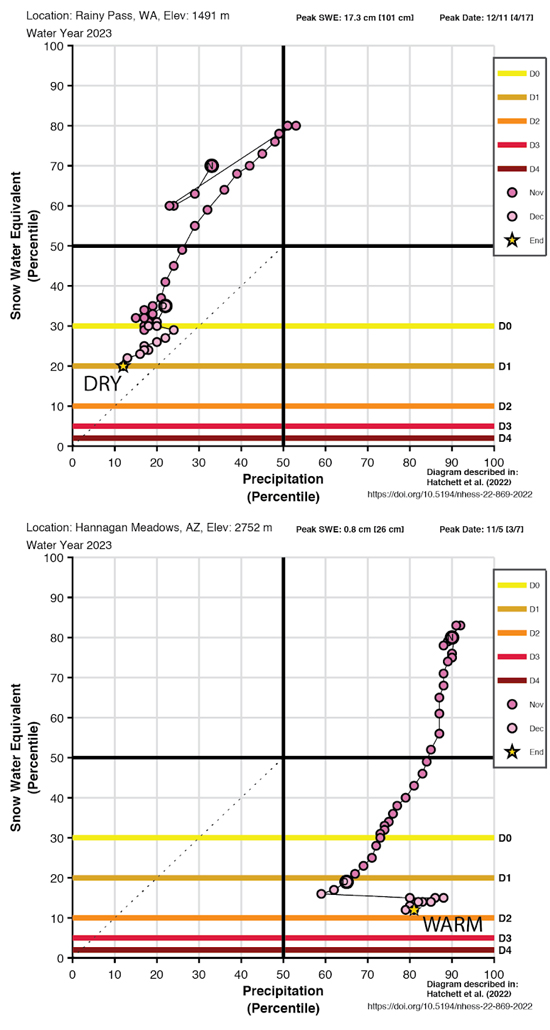 * Quantifying snow drought values is an ongoing research effort. Here we have used the 30th percentile as a starting point based on partner expertise and research. Get more information on the current definition of snow drought here.

NIDIS and its partners launched this snow drought effort in 2018 to provide data, maps, and tools for monitoring snow drought and its impacts as well as communicating the status of snow drought across the United States, including Alaska. Thank you to our partners for your continued support of this effort and review of these updates. If you would like to report snow drought impacts, please use the link below. Information collected will be shared with the states affected to help us better understand the short term, long term, and cumulative impacts of snow drought to the citizens and the economy of the regions reliant on snowpack.