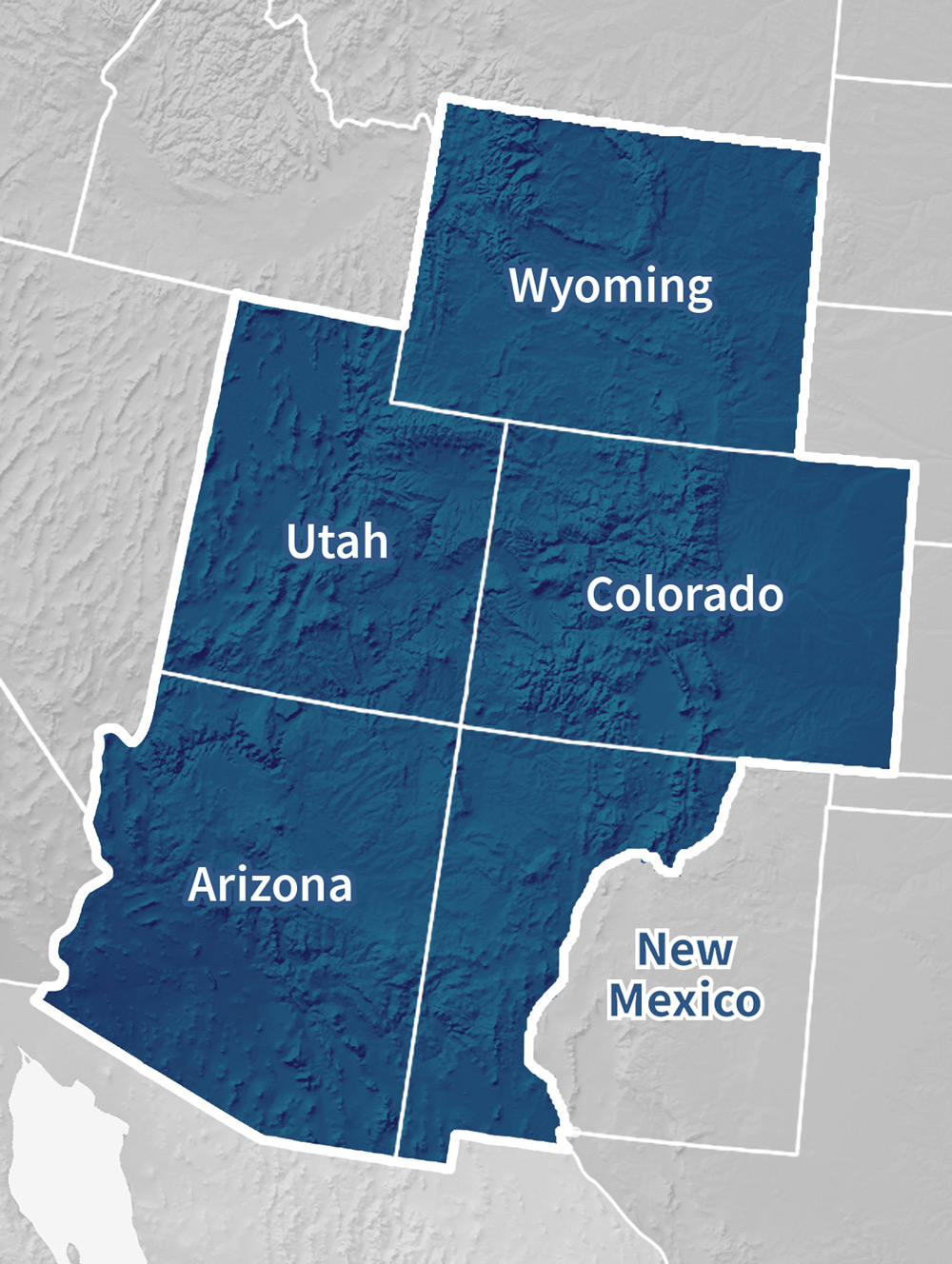 Drought can take different forms across the Intermountain West. This region includes many different climatic, geographic, economic, and social conditions. These include deserts and forests, fertile valleys and alpine peaks, densely populated cities, and some of the most remote landscapes in America. The monsoon is a dominant driver of summer weather in the southwest, while the jet stream has a greater impact on weather systems in the northern states. Droughts may onset quickly and last a season or come on gradually and last decades. In addition to (and because of) the highly variable precipitation, all five states in the Intermountain West also depend on the over-allocated Colorado River for a consistent water supply. The Intermountain West DEWS helps foster interstate coordination to cope with current and future droughts and growing water demands and supports increased communication and collaboration between scientific, water, and land management communities.

END_OF_DOCUMENT_TOKEN_TO_BE_REPLACED

The following table highlights activities in the Intermountain West that are ongoing efforts related to drought, involve multiple partners, serve as a unique way to address regional drought needs, and are related to at least one of the components of drought early warning. Please contact Joel Lisonbee (joel.lisonbee@noaa.gov) for more information about the table or to inquire about getting an activity added to the list.

The Utah Drought Coordinator hosts regular webinars to discuss weather conditions around the state to contribute to the U.S. Drought Monitor. For more information on the Utah Drought Webinar…

This project is investigating how hypothetical reduction of 300,000 acre-feet of irrigation water for Pinal County agriculture would impact on the local economy.

This project examines potential climate change and variability adaptation strategies related to water and energy in the Colorado River and Rio Grande Basins, including northwestern Mexico.

This project examines the role of water management information and irrigation technologies in agricultural adaptation to climate variability and change in the 17 westernmost U.S. states.

Monitoring drought across the diverse climates of the Intermountain West DEWS region can be difficult. For example, a drought in the Sonoran Desert may look very different from a drought in the Wasatch Mountains. The Southwest counts on the summer monsoon while the Rocky Mountain regions rely on winter snowpack to get through the dry summer months. The Colorado River is the main water source for most of the Intermountain West, and winter snowpack in the Colorado Rockies usually sets the tone for drought conditions across most of the region from year to year. River forecasts across the Colorado River Basin are available through the Colorado Basin River Forecast Center.

Thoughtful preparations and effective policies can help communities cope with drought impacts when they happen. The states of the Intermountain West DEWS region all have plans for responding to drought. These have been produced by the state agencies responsible for the states' drought response and are linked on this page.

For other groups within the region (counties, cities, industry groups, farms, and businesses) that would like to create their own drought plan, we have included links to resources on this page. Or, contact the regional DEWS Coordinator, Joel Lisonbee, for some ideas on how to get started.

Across the Intermountain West, the timing of precipitation or a dry spell is an important aspect of water resource management. When will drought start? How long could the drought last? When will the monsoon start? How long will this year's snowpack last? This section includes resources for drought prediction and forecasting across various time scales. The appropriate time scale will depend upon your local climate, local crop cycles, local water demand, and the types of decisions being made (tactical or strategic).

NCEI provides precipitation data that can be used to show probability or the amount of precipitation to ameliorate or end a drought at different monthly scales.

NIDIS’s mission for the Intermountain West includes providing those affected by drought with the best available information and resources to better prepare for, mitigate, and respond to the effects of drought. This includes communication and outreach by NIDIS and our partners within the drought early warning network.

NIDIS is committed to working with researchers to better understand how drought impacts life in the Intermountain West and how to more effectively mitigate drought impacts in the future.