NIDIS with its partners release these updates every 4 weeks December through June.

Snow drought conditions remain over much of the Southwest U.S., Sierra Nevada, and Rocky Mountains.

This USDA Natural Resources Conservation Service (NRCS) map shows Snow Telemetry (SNOTEL) snow water equivalent (SWE) basin values over the western U.S. as a percent of the NRCS 1981–2010 median. Only stations with at least 20 years of data are included in the station averages.

The SWE percent of normal represents the current SWE found at selected SNOTEL sites in or near the basin compared to the average value for those sites on this day. This map is valid as of March 15, 2021.

This USDA Natural Resources Conservation Service (NRCS) map shows Snow Telemetry (SNOTEL) and Snow Course snow water equivalent (SWE) basin values over Alaska as a percent of the NRCS 1981–2010 median. Only stations with at least 20-years of data are included in the station averages.

The SWE percent of normal represents the current SWE found at selected SNOTEL and Snow Course sites in or near the basin compared to the average value for those sites on this day. This map is valid as of March 1, 2021.

Snow drought conditions remain over much of the Southwest U.S., Sierra Nevada, and Rocky Mountains with nearly one-third of SNOTEL stations below the 30th percentile snow water equivalent (SWE). Since the last update in early February, snowpack has improved in parts of Oregon, Utah, Colorado, and Wyoming. However, SWE deficits were quite large prior to these improvements with snow drought persisting in some areas even with the added snowpack. For example, February brought a series of cooler, wet storms that relieved warm snow drought concerns over some of Oregon. However, the southwest and southeast regions of the state remain below normal for snow accumulation and most likely will not achieve historic peak snowpack this season. Utah also received beneficial snow from a major storm cycle in mid-February but not enough to reach normal snowpack conditions.

The greatest area of snow drought expansion and degradation has been in the Sierra Nevada. No large storms (for Sierra Nevada standards) have occurred since the strong atmospheric river in late January. Some weak-to-moderate storms occurred in February and early March but not enough to keep up with climatology, leaving most Sierra Nevada stations below the 30th percentile SWE. Conditions degrade from north-to-south with a number of locations in the Southern Sierra below the 10th percentile SWE.

A major storm occurred March 12-14, bringing heavy snow and substantial SWE increases to the Front Range, Colorado, eastern Wyoming, and north slope of the Uinta Mountains in northeast Utah. The Denver airport received 27.1 inches of snow in two days, making it the fourth biggest snowstorm on record. These particular locations recovered from snow drought thanks to this storm. The South Platte River Basin, which drains the Front Range snowpack, gained 1.8 inches of SWE (when averaged over all SNOTELs in the basin) between March 13-16 and was at 100% of median on March 16.

Precipitation totals west of the Front Range, including the headwaters of the Colorado River, were beneficial, but much lower than on the east side. For the same period, March 12-14, the Colorado Headwaters River Basin (a sub-basin of the Upper Colorado), which feeds into water supply for much of the Southwest U.S., gained only 0.8 inches of SWE and was at 89% of median on March 16. A few pockets of heavy snowfall included the Verde River catchment in central Arizona and the Mountains of eastern Utah. For most locations in the west, however, this storm provided just enough to keep up with the seasonal average, and many individual stations within the Colorado Headwaters Basin remain below 30th percentile SWE.

Most of Alaska remains free of snow drought with the exception of the Koyukuk River Basin in north-central Alaska that drains part of the south slope of the Brooks Range. Several of the March 1 snow courses in this basin with 40-50 years of record reported SWE below the 15th percentile. At the Disaster Creek snow course, with 50 years of observations, two inches of SWE were recorded at the 6th percentile (63% of median). Further south, some isolated snow courses in the Susitna and Copper River Basins are reporting SWE below the 30th percentile. 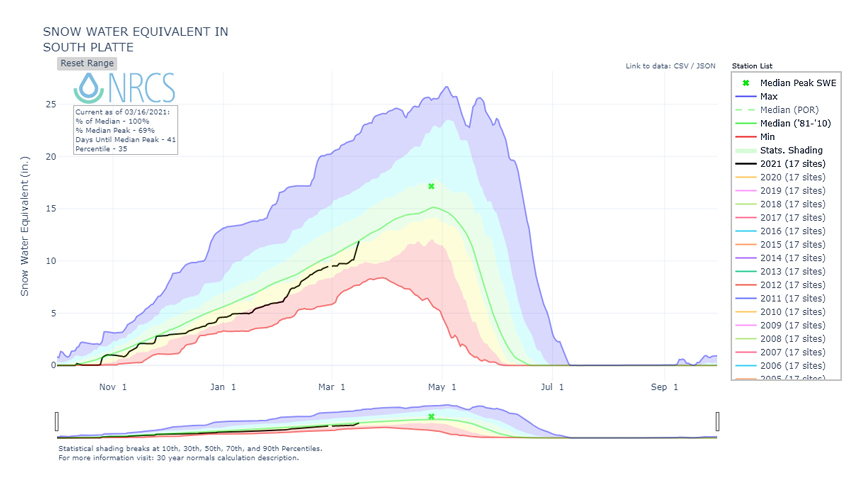 *Quantifying snow drought values is an ongoing research effort. Here we have used the 30th percentile as a starting point based on partner expertise. Get more information on the current definition of snow drought here.

NIDIS and its partners launched this snow drought effort in 2018 to provide data, maps, and tools for monitoring snow drought and its impacts as well as communicating the status of snow drought across the United States, including Alaska. Thank you to our partners for your continued support of this effort and review of these updates. If you would like to report snow drought impacts, please use the link below. Information collected will be shared with the states affected to help us better understand the short term, long term, and cumulative impacts of snow drought to the citizens and the economy of the regions reliant on snowpack